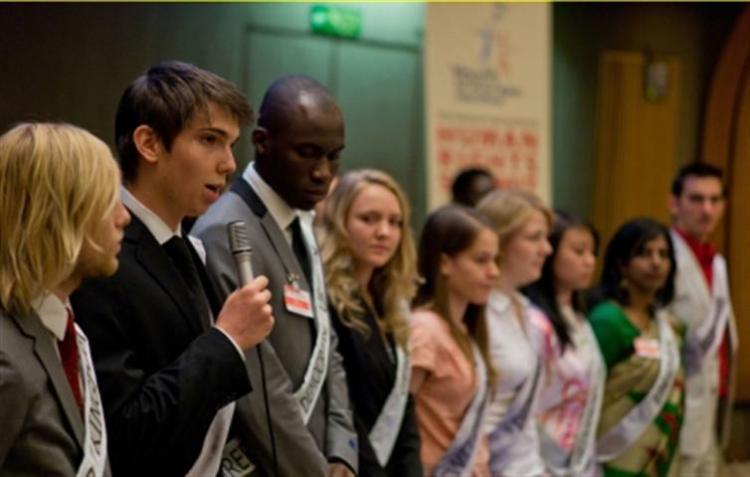 The UN Resolution proclaiming August 2010-2011 the “Year of Youth” was honored as part of the Summit’s theme. The Summit opened with a procession of the youth delegates carrying the flag of their respective nations. McGahee, who was the Youth for Human Rights International (YHRI) USA Delegate in 2009, came back this year as an International Youth Ambassador, and spoke at the UN Building to the Youth Delegates and UN Diplomats, about the activities of Youth for Human Rights members from across the globe. These young advocates have been busy not only educating others in schools and universities across the world, but also at events such as European auto races, World Cup Festivals, summer camps, soccer games, and concerts.

One of the most notable events created by the Youth for Human Rights Delegates was the “International Walk for Human Rights”, on United Nations Human Rights Day 2009, originated and spearheaded by Florida’s YHR President, Dustin McGahee. Using the power of the Internet, these youth created a historical event where over 20 countries and nearly 10,000 people joined forces to bring about the awareness of the need of human rights education and actions. McGahee said, “Creating this walk was possible by a gathering of youth at the Geneva Summit last year where filled with energy and camaraderie a diverse group of young people from around the world shared a desire to help others know and use their intrinsic human rights.”

The 2010 Summit was co-sponsored by the Uganda Permanent Mission to the UN, the Haiti Permanent Mission to the UN, Village Suisse NGO, Friends of the United Nations, Ariel Foundation International, the African Diaspora Foundation and the Human Rights Department of the Church of Scientology International, which has also sponsored the distribution of millions of YHRI educational materials, including public service messages about the Universal Declaration and the educational film, “The Story of Human Rights”.


Youth for Human Rights International, which was formed in 2001 by educator Dr. Mary Shuttleworth, is dedicated to fostering tolerance and peace through promotion of the United Nations Universal Declaration of Human Rights, the first document to define the fundamental freedoms and human rights in the United Nations Charter. The Declaration, ratified by the UN General Assembly in 1948, has influenced national constitutions, treaties, laws, and human rights institutions the world over.