"The wind from above assumes its old forms of arrogance and haughtiness. The police and the Federal Army close ranks around money and corruption. The wind from below once again travels the ravines and valleys; it is beginning to blow strongly. There will be a storm..." -Subcomandante Marcos of the EZLN 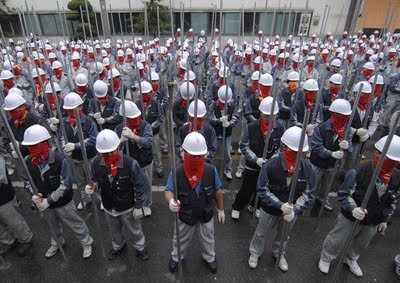 On August 3rd, the Korea Times reported that the National Police Agency will be mobilizing more than 400,000 police around the G-20 Summit in Seoul, November 11th & 12th, 2010. Multinational CEO's and leaders of the worlds twenty richest nations will meet during the G-20 on three islands, which have a price-tag of around 83 million(USD) to build...That's right, build. According to the Seoul Metropolitan Government, a total of three manmade “floating islands” are being built on the Han River between the Banpo and Dongjak bridges, and will be secured by anchors.

While thousands of demonstrators have taken to the streets during past G-20 Summits in North America and Europe, South Korean workers and activists have a long history of being even more militant in their struggle against the destructive policies of globalization than their counterparts in the Northwest hemisphere. In December of 1996, the South Korean parliament passed a new labor law which began a "structural adjustment" austerity program on behalf of the IMF and World Bank. These programs require countries to make debt repayment a priority, and as a consequence forces them to cut essential social services such as health, education, and development, thus lowering their standard of living. These programs also open the door to the privatization of natural resources, such as ancient forests and public water supplies, to be exploited by multinational corporations.

In the days that followed, 12 million South Korean workers went on strike to counter the new undemocratic labor law. In the years that followed, South Korean's continued to protest against the destructive policies of neoliberalism, most notably the WTO in 2003, World Economic Forum in 2004, APEC in 2005, and numerous other occasions. As the G20 approaches, the Korea Confederation of Trade Unions (KCTU) has announced it is planning to hold a rally and march on November 11th, the first day of the Summit. According to their website, “...the KCTU will do everything in our power to stage a massive anti-neoliberalism struggle that will gain attention of people and workers around the globe. To this end, we will prepare to hold People’s Action and be a leader of a great transformation.”

South Korean workers have often utilized the direct action tactics of resistance, such as strikes and factory takeovers, to large street demonstrations. It is not uncommon that the workers are also armed with slingshots, molotov cocktails, and sticks. Often times, in an act of more desperate resistance, workers commit suicide outside of their factories, sometimes through self-immolation. South Korean police on the other hand, much like their counterparts around the globe, have also demonstrated their willingness to continually brutalize their own citizens to quell public dissent of these policies. It is a well documented and common tactic for South Korean police to scrape the bottom of their metal shields on the concrete in order to sharpen the edges into a blade before they thrust their shields into the throats of protesters. Over the years, this brutal police tactic has led to the horrific deaths of many South Korean workers.

All this comes at a time when the fallout from past G-20's are still fresh in the air. During the 2009 G-20 Summit in London, Ian Tomlinson was beaten to death by police. On July 21st, 2010, his wife and nine children learned that the London police would not investigate his death, despite video and photographic evidence. None of the officers went to the aid of Tomlinson, who stumbled 100 yards down the road before collapsing and dying in front of thousands of demonstrators. In Canada, the police have begun an old-fashion witch hunt for the people they suspect are responsible for the property damage that occurred during the G-20 in Toronto. Up to 17 people are being charged with conspiracy and at least 4 individuals still remain in jail. In the wake of the Pittsburgh Summit, many cases still remain in court regarding criminal charges against activists, as well as the excessive use of force by police.

Whenever, and wherever, these large summits take place they are always preempted by a heavy campaign of psychological operations (PSYOPS) to prepare the population for the inevitable urban warfare and heavy handed police tactics that ensue. Authorities, for months ahead of time, tell local residents propaganda, such as “the rioters will threaten your lives” and “burn your city like Seattle in 1999” and that the “police are here to protect YOU, from THEM.” However, our collective experiences globally show us who the real violent faction is...In the past, we've seen all too often the police instigate violence, only to have the embedded corporate media twist the facts in their reporting later on. Given who they are protecting, and who pays their salary, it should be no surprise that the goal of both the police and corporate media is to delegitimize demonstrators and create pretexts to silence them. It is commonplace now that peaceful citizens are rounded up like sheep in “mass arrests” in order to create and/or expand their intelligence database of dissidents. The people who choose to resist and/or practice self-defenses are often labeled “terrorists” and face a multitude of oppressive weapons such as live-round and less-lethal ammunition, chemical weapons, and even newer oppressive directed energy technologies such as the LRAD sound cannon. Not only are the policies of neoliberalism destructive to human lives, the environment, and future of humanity in general, it could not be made possible without the collaborating authorities that protect these elite criminals through violence and deception.

As we've seen in other locations where these summits were held, South Korean police have already began their crackdown on immigrants, homeless, unions, students, and activists. Authorities there have launched large-scale deportations and raids against migrant workers and street vendors are slowly being moved out to prepare the battlefield. According to the Korean Times, “During a recent rally in front of Myeongdong Cathedral in downtown Seoul, Michel from the Philippines, the chief of the Migrants’ Trade Union, condemned the ongoing crackdown, saying, '“The Korean government is using the G-20 Summit as an excuse to trouble minorities. We want the government to end their oppressive behavior. End the crackdown!”'

Amidst the growing state repression in the lead up to the G-20 in Seoul, the South Korean National Police Agency (NPA) has created a special police unit as part of its effort to enhance security around the summit. Police operations headquarters will be set up in Seoul September 1st and will bring in elite mobile field force units of "riot troops" from across the nation. All officers will continue to be on high alert until November when hundreds of finance/business CEO's and world leaders gather in Seoul, in an attempt to fix the crisis their policies created. This will undoubtedly become a milestone for the G-20 and within the anti-globalization movement, as South Korea becomes the first country in the Asian region, and from the "emerging world", to host a G-20 Summit.

Based on the outcome of previous G-20 Summits and the response of South Korean police to demonstrations in the past, it is almost guaranteed that the South Korean people can expect extreme police repression and increased erosion of their hard-won democracy, before, during, and after the summit. As in the past, the G-20 will almost certainly conclude in an undemocratic fashion, and will attempt to promote and solidify more of the same oppressive neoliberal policies the working people of the world struggle against every day. On the one side is neoliberalism, with all its repressive power and machinery of death; on the other side is humanity.

There will be a storm...


MULTINATIONAL CORPORATIONS:
(Over 100 CEOs will attend the Seoul G20) 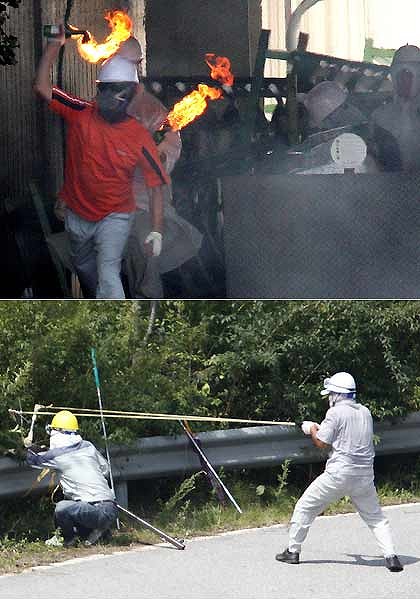