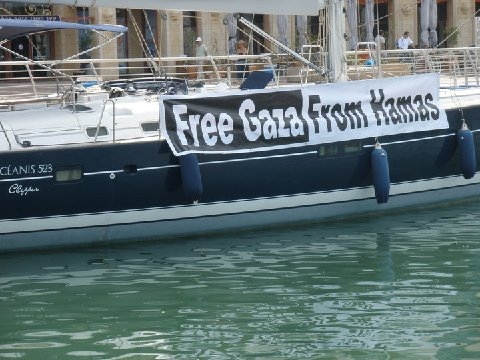 THREE STANDWITHUS BOATS WILL DEPART ASHDOD ON FRIDAY, MAY 28 AT 1PM

[May 27] Self-styled European human rights activists will be in for a big surprise this weekend when their eight boats try to illegally land on the coast of Gaza to break what they call Israel’s "illegal Israeli blockade" of the Gaza Strip. “We will be there with our own flotilla of boats and signs that expose the real human rights problem—Gaza must be freed from the chains of the Hamas dictatorship and its Iranian sponsors. This will be a duel at sea of facts versus propaganda,” said flotilla organizer Roman Baron, an Israeli Fellow in the international Israel education organization, StandWithUs.

Three StandWithUs boats will depart from the port of Ashdod on Friday, May 28 at 1pm each carrying 12-15 passengers including journalists from major international outlets. The boats have a massive banner draped on the side "FREE GAZA FROM HAMAS." People will wear t-shirts that say "FREE GAZA FROM HAMAS." SWU will hand out copies of its Hamas charter booklet, among other literature.

Coalitions of anti-Israel activists have organized several other similar boat trips to Gaza, but this will be the first time they face a full-fledged counter-demonstration.

The “Free Gaza” movement claims its concern is humanitarian suffering in Gaza, but in fact the boats are a media stunt to get international attention and support for Hamas in Gaza, according to StandWithUs. “If the activists were really interested in delivering their donated goods, they could easily do it through legal channels. The Israeli government offered to deliver them through approved crossings and procedures, but the activists’ purpose is to smear Israel and support Hanyieh’s Hamas regime, not help Gazans,” explains Baron.

“Our mission is education, and the anti-Israel flotilla has created an excellent educational opportunity. Our signs will expose how Hamas oppresses Palestinians, and has been the major enemy of peace. The activists are either misguided or hypocritical in calling themselves pro-peace or pro-human rights when they support this Iranian-sponsored group that terrorizes its own population and Israelis. If these groups were pro-Palestinian and pro-coexistence, they would join us to fight the Hamas-caused disaster,” said Roz Rothstein, co-founder and CEO of StandWithUs.

Hamas’ cruelty and repression informed the signs, according to StandWithUs. Hamas staged a violent coup in June 2007, torturing and murdering hundreds of its political rivals in Fatah, and established a virtual police state that continues persecuting and murdering rivals, summarily executes alleged “collaborators,” intimidates journalists, and enforces strict Islamist “virtue” codes on women, internet use, dancing and music. Hamas steals humanitarian aid and bombs crossings where goods are transported because it refuses to cooperate with “the enemy.” Hamas refuses to end its war against the Jewish State. Its founding charter calls for the murder of Jews, the “obliteration” of Israel and its replacement with a Taliban-like theocracy. Hamas has launched over 8,000 rockets at Israeli civilians, uses human shields, and mounts its attacks from Gaza’s schools, mosques, hospitals, and other civilian centers.

Hamas is open about its close ties with Iran whose President Ahmadinejad regularly makes genocidal threats against Israel. “Iran is our mother…She gives us information, military supplies and financial support,” said one Hamas Commander on March 9, 2008[i]

“These so-called human rights activists who plan to meet Haniyeh are directly supporting Iranian president Ahmadinejad and his genocidal threats against Israel. They are either uninformed or they are enemies of peace and human rights,” said Michael Dickson, Director of the StandWithUs Israel office.

“If the activists had done their homework instead of believing Hamas propaganda, they would also have found out that their assistance isn’t needed. There is no humanitarian crisis in Gaza,” added Dickson. The Financial Times just reported that there is such a “glut” of goods in Gaza that prices for food, luxury items, and clothing is plummeting. Other media report that an Olympic sized swimming pool has just been built on the Strip, and that fancy restaurants and luxury goods are doing brisk business. This activity was in addition to the over 94,500 tons of goods and medical supplies that Israel transferred to Gaza just between Jan. and March of 2010. “This just further underlines that the ‘humanitarian mission’ is not what it claims it is.

“Ending Israel’s restrictions on Gaza could be easy. Hamas just has to end its war, accept Israel’s existence as the Jewish State, and agree to past PLO-Israel peace agreements. Our flotilla will educate the public and hopefully pave the way for a better future for Israelis and Palestinians,” said Baron

[i] “Palestinian Hamas Groups Admits that Its Fighters are Trained in Iran,” Times [UK], March 9, 2008 at http://www.timesonline.co.uk/tol/news/world/middle_east/article3512018.ece