A brief explanation on why the "Wetback Wednesdays" at the Garage Door Saloon is a bigger deal than the media is making it out to be.

The discussion about recent controversy over the Wetback Wednesday drink special at the Garage Door Saloon in Oakland has largely centered around whether or not people should be offended by the term Wetback Wednesday and whether the special is racist or not. Oddly, none of it seems to talk about the owner of the bar and what might motivate him to start such a racially charged drink special.

The Garage Door Saloon is one of two bars owned by South Side Sin City, Inc. The other is Casey's, on the South Side. The man who runs this company, and presumably the man who identified himself as "Mark" to the news media1, is Michael Papariella. Papariella used to be the drummer for a local hardcore band called Built Upon Frustration2. He was brought on as a replacement and then later kicked out. The rumors that have been swirling are that it was because of his espousal of white supremacy and wearing clothes with white power slogans.

Perhaps it's this ideology of white supremacy that leads Casey's to hang a confederate flag from its walls3. Perhaps it's the ideology's affinity for violence that made Papariella jump the bar to slam a customer's head into the wall because the customer "fonzied" the jukebox4. It's violence like this that fuels rumors of Papariella's association with the violent, drug-dealing and often racist Pagan Motorcycle Club (one of the "Big Four" so-called Outlaw Biker Gangs according to the feds)5. Perhaps this ideology is why he sued the City of Pittsburgh in 2003 for hiring "less qualified" minorities instead him for the Pittsburgh Police Department6. (On this count, this reporter agrees with Papariella—who could be more qualified to be a cop than a violent, racist, sexist gang member?)

This all seems to explain a lot. This drink special is obviously not so "harmless" as a racial slur uttered as a joke; it is a political statement meant to capitalize on the immigration debate—a tactic that white supremacists have been using for the last several years. 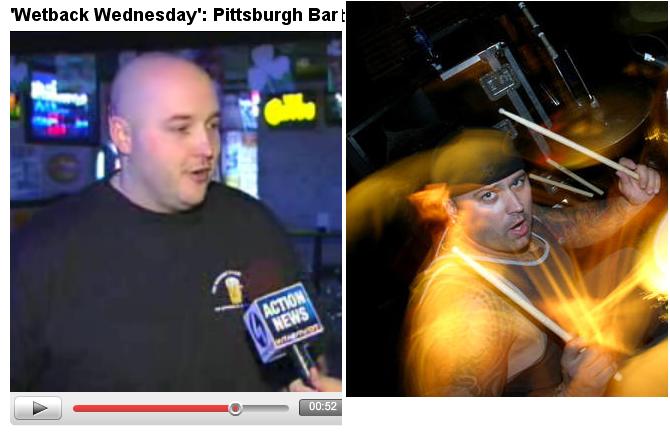 If you look carefully at the facial features (especially the nose and ears) of the "Mark" from the news and Mike Papariella in his Built Upon Frustration days, it becomes fairly obvious that the two are the same person.