In Utica, NY, resident Walter Washington was shot and killed by a Utica police officer this summer. The details surrounding the events of that night are shady at best and bizarre at worst. Many questions are still unanswered and Mr. Washington’s friends and family live in a state of uncertainty as they attempt to find the truth of the events surrounding Washington’s death. 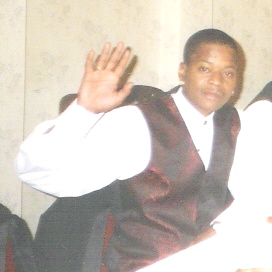 On the evening of July 5, 2002 Walter Washington headed over to his girlfriend Patricia’s house. Patricia and Walter had been a couple for 20 years and parented three children. He was very upset, and with reason. Recently, Walter had caught Patricia in the middle of the act of cheating on him. Two days prior, he had slashed the tires of the car owned by the man Patricia was now seeing.

Though he had a key to the house, he decided to sit on the porch to have Patricia come out to talk. Patricia called the police, complaining that an unwanted person would not leave her residence.

Right when the police arrived, Walter Washington exited the premises. The police conducted a search and finding no one, left the residence.

After they left, Washington went back to his girlfriend’s porch and waited there for her to come out. Patricia called the police again at around 11:50 with the same complaint. The same patrol car responded to the call and arrived at the house, pulled up to the driveway and parked next to the porch where Mr. Washington was sitting. He ran down the steps, went down a sidewalk which ran along the house to the back, and proceeded to follow that sidewalk, taking a sharp right around the back of the house.

At this time, Utica police officer Samuel Geddes followed him, while the NY State Trooper who was in the car with him, Trooper Haver, went around the front of the house to meet Geddes in the back.

Mr. Washington’s girlfriend is still in a state of disbelief and grief over the matter. When asked why she called the police in the first place, she said she did not feel threatened but wanted her boyfriend to leave because it was late at night. “If I had known [the police] were going to shoot Walter, I would never have called them.”


By the time the EMTs arrived it was already too late. When they arrived Mr. Washington had a faint heart beat, but the bullet’s path through his aorta and lungs made it impossible to save him.

Patricia and her children were whisked away to the police station to be questioned. Washington’s brothers and parents were notified about what had happened, but were not allowed into the hospital to see him for quite some time.

Officer Geddes was placed on administrative leave for a week, with pay. The DA’s office, claiming that they would leave “no stone unturned” in their investigation, concluded in one week’s time that the actions of Geddes “were a reasonable and justifiable use of deadly physical force.” Geddes was put back on the job. Within a week some citizens complained about Geddes’ belligerent behavior towards black youth in the inner-city. It is interesting to note that Geddes has been accused in the past of racial profiling.

Patricia noted that throughout that entire week, no one from the DA’s office came to her house until the day before the final DA report came out. DA Michael Arcuri made conclusions in this investigation without a trajectory report, looking at the autopsy report or at the NY State Police report on the actions of State Trooper Haver (which to this date has not been concluded and is still under investigation).

The report also mentions that after Walter was shot and had slumped to the ground, gloves were found on the scene, as well as a pellet gun and a pocket knife which were both on the ground. Although it was not mentioned in the report, the DA made later statements that the gloves were on Walter’s hands that night.

DA Arcuri and police ran with several different stories of how events unfolded that night. In public statements and reports, they made several changes in the position of Geddes and Haver and the actions and position of Washington. The police even ran with a story that tried to lay the blame of the shooting on an unidentified man whose physical appearance happened to be that of a typical black man in the neighborhood.

The story they chose to run with was that Washington had a gun and aimed it at Geddes. It turned out that, according to the police, the weapon was a pellet gun.

It was immediately following the shooting of Mr. Washington that Geddes saw that there was a witness to the shooting and asked her if she had seen a man with a black hooded sweatshirt run away. This story was aired on the local morning news WKTV, but was soon abandoned after the police realized that bullets from Geddes’ gun were lodged in Mr. Washington’s body and the house where the shooting took place and this evidence would not be so easy to cover up.

According to Arcuri, the officers told Mr. Washington to stop running “several times”, to put his hands up and to put the gun down “several times.” Patricia, her four children and neighbors never heard any of this. They were all in perfect hearing distance.

The neighbor of Patricia, who shares the same building, was in a room directly above where Washington was shot. After she heard the gunshots, she looked outside to see Washington on the ground looking up in her direction. She confirmed that she did not see any gun either in Washington’s possession or in the area surrounding him. She also noticed that while this scene was unfolding, Trooper Haver was off to the side throwing up.

The bullet that was used to kill Walter was of a hollow-tipped point black talon design.

The unique design of this bullet enables the tip to expand in size as it enters an object, or any mass. The tip spirals out and becomes larger the farther it travels through a mass. These bullets have been ironically called “cop-killers” because they can shred through materials such as Kevlar. The DA claimed that Geddes did in fact shoot to kill as he had taken careful aim at Washington’s “central mass” (where his heart, lungs and vital organs are located).

What is perhaps even more disturbing than the bullet used to kill Washington was the position of Washington’s body after he was shot.

According to Patricia and her son, the heels of Washington’s shoes could be seen sticking out of the side of the house where Washington fell. This means that his body was to the back of the house. He was lying on his right side. The witness who looked out the window above Washington and saw him confirmed this position as well.

But when the EMTs arrived they found Washington lying on his wound (his left side), with his back facing the house. This means that somehow between the time Washington was shot and the time of the EMTs’ arrival, Washington’s body was moved 180 degrees.

This also runs contrary to the DA’s story claiming Washington was wearing gloves that night. If the DA’s story is true then it would partially explain why there were no fingerprints whatsoever found on the pellet gun. Perhaps the gun came from elsewhere.

When questioned about the entire story Barrie Gewanter, Director of the Central NY Civil Liberties Union, stated that she was “disappointed that the DA released a report without questioning witnesses, neighbors, or the EMTs.” She also said, “Given no clear evidence on whether or not Walter [Washington] was wearing gloves, and the fact that there were no fingerprints on the pellet gun, this raises questions as to where the gun came from.”

The next door neighbor claimed that after Mr. Washington was shot, Geddes ran over to his car to retrieve something from his trunk. He then brought that item to Washington’s body.

The scene in Utica began to change following Mr. Washington’s shooting as well.

State Trooper Haver was with Utica police officer Geddes in the first place because they were working at the time under Operation IMPACT (Integrated Municipal Police Anti-Crime Team). Operation IMPACT was first announced to the public by Governor Pataki in his State of the State Address in 2004. The purpose of the program is to combat blue collar crime, illegal drugs and guns. The program has developed in numerous cities throughout New York and it links local law enforcement with state and federal agencies.

This program abruptly ended in Utica 9 days after Walter Washington was shot and killed.

Officer Geddes acted as star witness in a number of cases brought to court that involved Operation IMPACT. One can only imagine the difficulty Arcuri would encounter if his star witness was taken off the police force for unjustifiably shooting and killing someone.

Arcuri did note that the investigation would not go to a grand jury and would instead be undertaken solely by his office because it would spare Geddes from being rigorously investigated by a grand jury if he did in fact act properly.

Furthermore, Arcuri attempted to either silence or write off people in the community giving different accounts of the story.

One active member in the community who helped organize a community group called Justice For Walter was surprised to find the DA pull up in her driveway one day. He told her to “keep quiet” because his office would take care of the matter. He also added that it was an election year and did not want any disturbances.

She ignored the DA and pointed out that Arcuri’s “credibility has been shot since day one” because of past cases he was involved in where he withheld exculpatory evidence.

Arcuri also accused citizens of playing the race card whenever they brought up the fact that a white cop had killed a black man.

The future is uncertain for the Washington family in their search for truth and justice. However, there is some hope. Lawyers have offered help as well as the ACLU. A woman at the Department of Justice was appalled that there was no federal investigation into the matter and that checks and balances have been non-existent. Mr. Washington’s parents filed a lawsuit against the city. Aside from creating the Justice For Walter group, some residents have talked about implementing a Cop Watch program to police the police.

Hopefully, the truth will be revealed and Walter Washington’s family will receive some justice. Perhaps the social justice groups forming in the area as a response to the killing of Mr. Washington will find some form of justice the Washington family so desperately needs.