A New World in our Hearts: Anarchist May Day Festival!
by Louis Lingg Wednesday, Apr. 27, 2005 at 7:41 AM
inourhearts@gmail.com (email address validated) 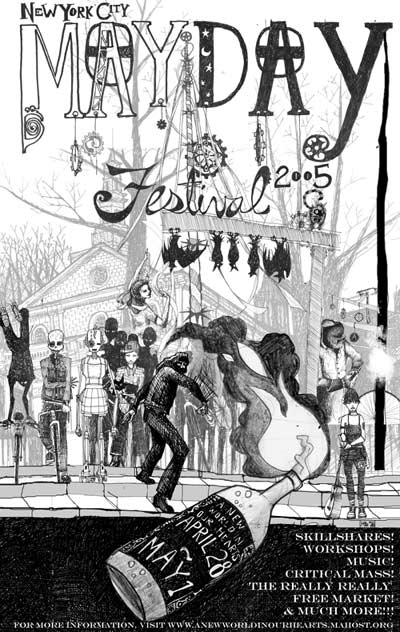 A New World in our Hearts: Building for Revolution May Day Festival

Horizontalism in Argentina
A conversation of the current autonomous movements in Argentina, including specific discussions on topics such as power and how the movements are similar, or not, to anarchist concepts and visions. Time's Up 3:45pm -5:45pm

Beehive Collective
A popular education on the subject of globalization and presentation of their Plan Puebla Panama Poster. Washington Square Park (the rain location would be close by in an NYU building) 5:00pm -7:00pm

Afropunk Film Screening
Afro-Punk, a 66-minute documentary, explores race identity within the punk scene. More than your everyday, Behind the Music or typical "black history month" documentary this film tackles the hard questions, such as issues of loneliness, exile, inter-racial dating and black power. Time's Up 6:00pm -8:00pm

Bicycle Repair Workshop
Ideally for a more intermediate skill level, but again all are welcome. In this gathering, folks can work on their own bikes, with the guidance of volunteers. Time's Up 6:00pm -8:00pm

Brooklyn Freeschool Presentation & Freeschooling Workshop
A talk about the genesis and status of the Brooklyn Free School, what free schooling is, and why it might be a good idea. Free schooling is a radical educational philosophy/practice that allows kids to pursue their passions without forcing them into "learning" anything. ABC No Rio 12:15pm - 1:15pm

How Anarchists Can Network Better
In this facilitated discussion we will be attempting to analyze the concept of networking as it applies to our struggle. We will look to the many ways that we already engage in networking projects and brainstorm ways that anarchist networking can be more effective. ABC No Rio 1:30pm - 2:30pm

Supporting Political Prisoners
A workshop that covers why anarchists should be engaged in prisoner support and how to do it. St. Mark's Church 1:30pm - 2:30pm

Counter-Biotech for BioDemocracy
A multimedia workshop to educate and inform the general public as well as dedicated activists about the hazards of corporate biotech and the possibility of ecological alternatives. 2:45 pm -4:15pm

Security Culture
Tactics that the police and FBI use to catch activists committing "crimes" and how activists can avoid getting caught. St. Mark's Church 2:45pm- 3:45pm

Advanced Security Culture
This is not a regular history of COINTELPRO, or basic security stuff (e.g. don't blab to people). No this is more about the next step. How to investigate sketchy folks, how to use codes in an easy way, how to search for microphones and bugging equipment, how to use computer security, how to do a real vouched for meeting, etc. St. Mark's Church 4:30pm - 5:45pm

Anarchism & Mayday
Discussion on the history of Mayday from a new anarchist perspective. ABC No Rio 5:00pm - 6:30pm

The Abolition of the State: Anarchist and Marxist Perspectives. Bluestockings 7:00pm - 8:30pm

Puppetmaking in Our Hearts!
We will make puppets! Time's Up Downstairs 10:00 am -1:30pm

How I Became Teenage Vegan Anarcha-Feminist: Stories about Feminism and Animal Liberation
This is a multimedia, discussion-oriented workshop about how the struggles for feminism and animal liberation are inextricably tied together. Time's Up 10:30 am -11:45am

Reclaim the Sex!
A hands-on, clothes-on workshop where we will brainstorm, dream, and practice some skills for DOING IT. Topics that will come up: Communications strategies, health & harm reduction, sex radicalism, and diy sex toys, and a genderfuck anatomy chart unlike your sixth grade health class! 6th Street Community Center 11:00 am -12:15pm

The Really Really Free Market
A open-air bazaar and celebration, where we will discard capitalist notions of interaction and have fun trying new models of exchange. Swap goods (You know, the stuff that is too good to throw away but you shouldn't keep), share skills, give presents, eat food, hang out, dance, sing and have fun -all for free! St. Mark's Church Outside 12:00pm -Dusk

Men's Group Anti-Sexist Workshop
A space for people identifying as experiencing patriarchal privilege to discuss how we perpetuate and participate in that sexist system, and how we can stop doing so. The discussion will be facilitated to encourage everyone to have an equal chance to speak, and loosely moderated/structured around some general questions/points of discussion. 6th Street Community Center 12:30 pm -1:30pm

Bathos (Swim Motherfucker!)
Mayday Polar Bears Club! We will be crashing some as of yet unnamed public fountain en masse & in our skivvies, because to us a new world in our hearts begins with the consummate transformation of the boring
but beautiful places we are supposed to just look at but not touch (or jump into half naked & screaming), you know, under the paving stones the beach! Meet at St. Mark's Church 2:00pm - 4:00pm

Soil, Seperation, & State
Development & the impact of "Making the Desert Bloom" in the context of the ongoing Israeli-Palestinian conflict. The Negev, the
southern region of Israel populated by Bedouin & Jews, is plagued by divisions- Beyond camels, coffee, & carpets, Israel's Bedouin minority has been divided by geopolitics & tribalism, and is striving to withstand the forceful currents of urbanization & modernization. 6th Street Community Center 2:30pm -3:30pm

An Introduction to Computer Security (Part 1)
Covering authentication issues, if you can trust the computer you are using, network security, and a case study as an example. Pre-requisite for "Towards a Trusted Computing Environment." Time's Up 2:30pm -3:30pm

Towards a Trusted Computing Environment (Part 2)
Some basics of computers leading into a workshop on Knoppix which is a step towards a trusted computing environment -- where would this could be used, what it is, why Knoppix, how to run Knoppix, and a demo. We will hand out cd's with Knoppix so that people can begin to apply what they learned. Pre-requisite: "An Introduction to Computer Security." Time's Up 3:45pm -4:45pm
Walking on the Edge of Insanity
As radical political activists and folks living on the fringes the conventional social system, what does it mean within our extended anti-authoritarian community for someone to be "mentally ill" or struggling with traditional labels such as "clinical depression," "bipolar disorder," or "schizophrenia"? 6Th Street Community Center 3:45pm -5:15pm

Anarchism In America (A Pacific Street Film)
A colorful and provocative survey of anarchism in America, the film attempts to dispel popular misconceptions and trace the historical development of the movement. The film features rare archival footage & interviews with significant personalities in anarchist history and also live performance footage of the Dead Kennedys. Time's Up 5:00 pm -7:00pm