On Tuesday, April 26, thirteen members of Pittsburgh Organizing Group (from CMU and elsewhere) confronted recruiters for the U.S. Army Reserves who were tabling at Carnegie Mellon University (CMU) today effectively shutting down recruitment for 45 minutes. 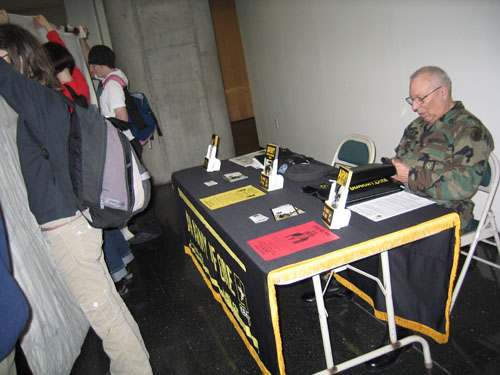 After marching into the University Center, we held a banner that blocked view of the recruiters and their table. This was much to the surprise of the recruiters who had just been telling a passerby that enlistment could help someone like him get through college with the nice bonuses they're giving out. We're sure you've heard the sales pitch before: “$20,000 for college, fun work in technology fields for the jobs of tomorrow, travel the world, have your college paid for…” Basically, “Join the Army, travel to exciting places, meet new and different people - and kill them.” The military has hundreds of millions of dollars, fancy advertising, skilled salespeople, and almost unfettered access to potential recruits, all to ensure that our government has a fresh supply of warm bodies to “enforce” the will of the powerful. The recruiters at CMU are paid to do what they do, use whatever means to convince people to sign on the dotted line. They coerce, misrepresent, and often times flat out lie about the terms and responsibilities of enlistment.

We distributed flyers to students about important things to consider before signing an enlistment contract.

The response to the temporary disruption on the campus was mixed. Some people stopped to talk to those holding the banner and to take pictures. One passing CMU student identified themself as bisexual and confronted the recruiters on the army's discriminatory policy towards LGBT people. A couple pro-military passersby stopped to congratulate the recruiters on "defending our country from scum." One masked-up passerby ran between the banner and the table, quickly snatching the recruitment materials, and fled the scene.

After telling us that they didn't care we were there, because "MEN like [them] exist to protect [our] right to do things like this," one recruiter left to ask the University service desk to remove us.

The head of the CMU University Center came and told us we had to leave. After we refused, she brought in a detective and a security officer. Official CMU police arrived on the scene shortly thereafter. At this point we were ordered to leave and told we would be arrested. One police officer started pushing one person holding the banner. The officer on the scene was heard telling radio dispatch “we need lots of backup done here right now.”

Some of us started chanting, “Recruiters off campus!” Just as we left the building, two more police cars and KDKA news arrived.

This action was part of POG's continuing counter-recruitment campaign.

A small sampling of some of the info we're trying to get out there about enlistment and recruitment:

- Despite the stated length of enlistment (usually four years), recruits can be kept in the military indefinitely, or called back from the reserves many years later as is being seen with the current back door draft (a.k.a. “Stop loss”).

- Recruiters promise training that will lead to better jobs in civilian life. But several studies show that veterans typically earn 12% to 15% less than those workers who do not go into the military.

- College benefits are a great exaggeration. Because of all the small print requirements to receive college benefits, only 15 percent ever receive a college degree -- only 35% receive GI bill funds for college. Indeed, the average participant actually receives less money than a student who simply receives a Pell Grant and a Stafford Loan. And you pay $1,200 during your first year of service for the program, money you won't get back when you aren't part of the 35 percent getting some money from the GI bill.

- Women in the military not only face a high incidence of harassment and rape, but have little recourse when such actions do occur. The machismo culture of the army makes it difficult for anyone to break the wall of silence. Survivors often get pressured and threatened to remain silent, and while this is prevalent in other professions, it's much worse in the closed environment of military life.

- Military life is very hard on families; family abuse and violence are three to five times higher than in the civilian population.

- The hazards of military service include more than just getting killed or wounded. For instance, less than 300 U.S. soldiers were killed in the first Gulf War of 1991. But tens of thousands of Gulf War vets have reported chronic, debilitating physical and psychological disorders since serving in the Gulf.

- 1/3 of the homeless in this country are veterans. If you're curious why, try asking a recruiter that question.

- Finally, the fine print on the back of the enlistment contract makes it clear that no promise made by the government has to be kept. The Military Enlistment/Reenlistment contract states: “The following statements [in the contract] are not promises or guarantees of any kind. They explain some of the present laws affecting the Armed Forces which I cannot change but which Congress can change at any time.” The government pretends they care about the health and well-being of troops and then goes and cuts benefits and services for veterans. 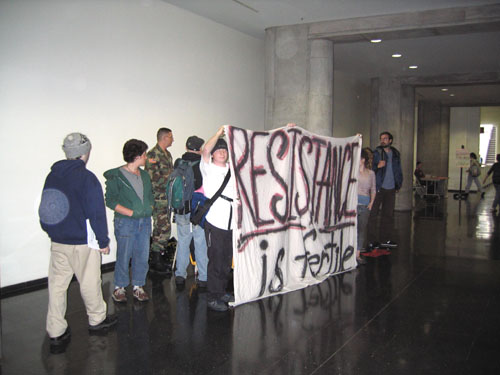 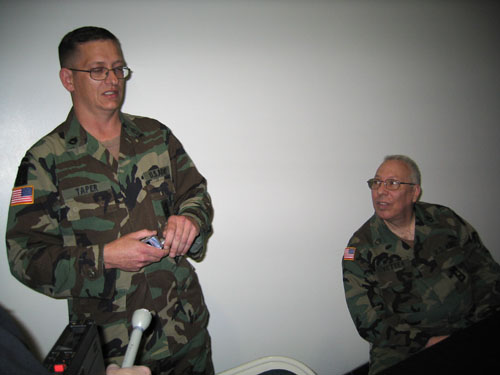 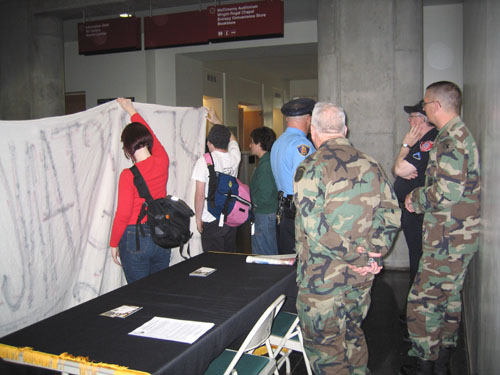