Lots of media and about 150 rowdy protesters waited to greet Tom Delay at the Hilton hotel adjacent to the George R. Brown Convention Center. Tom Delay was scheduled to speak at the NRA's big shindig that evening. 5 acres of guns and ammo were a few yards away at the George R. Brown. When we arrived around 6:30 pm, protesters armed with clever signs and high powered lungs, lined the barrade across from the hotel. We brought our handy ear-splitting whistle and a big ol' sign.

The usual chants of: "Dump Delay!" and "hey, hey, ho, ho, Tom Delay has got to go!", were interspersed with the more effective, "What do we want? INDICTMENT. When do we want it? NOW!" and the eery, low sound of protesters calling out, " Tommmmyyyy, oh Tommmmmyyy" between the chants.

NRA Banquet attendees got an earful of whistle as they departed their stretch SUVs and headed for the revolving doors. A few Tom lovers stood outside, flipped an occasional bird, took lots of pictures and look perplexed. The banquet attendees inside and several floors up, stood at the windows, staring down with their arms crossed. The protesters seemed to hold the banquettes attention the whole time. We also met a woman named Patricia Baig who said she had placed a full page ad in a Ft. Bend County newspaper about the protest. Ft. Bend is in Tom's district. Patricia said she was a republican and really liked our sign.

KTRH is it's typical, fascist, dumb-ass self. KTRH mouthpiece asked one protester, " Don't you have something better to do, then spend your Saturday afternoon here?". KTRH has no concept of ethics. Same ditze comes up to Keith and says, "Next victim, I mean....." Then she makes this comment stolen from a Houston Chronicle article. Something like: " While people are celebrating their 2nd Amendment rights inside, others are celebrating their 1st Amendment rights, outside". Keith says into the mike, " I'd like to correct you, our sign says: "Keep guns, Ban Delay." This seemed to throw her off and she flubbed her lines and comments, "oh they will edit that".

The protest was set to end at 8:30 pm. The protest organizers made an announcement, inviting us all to a local bar a few blocks over.
We stayed until the last, shouting 'bye bye Tom, good luck in jail!". As we finally started walking out of the view of the hotel, here comes Delay's stretch limo with a police escort.
So we ran back. The hotel's staff was lined up outside to greet him, but we made it back and I started screaming, "Stop thief!" while Keith starts blowin' on the handy whistle. This causes the limo to speed around the corner instead of pulling into the front of the hotel. There were a few straggling protesters that had rounded the corner opposite us and they came back and started hollering too.

We stood for a short while whistling and shouting "Chicken! "
As we left, we encountered some pro-tom dumb-asses. Seeing our sign, one bragged about his vasectomy. I kid you not. I said "so what?" He said "it's better then an abortion", I said "not in your case". The woman with him said something. We had just crossed the street and could not hear what it was and didn't care. They're the past. We were outta there and that's how it looks for Tom Delay. 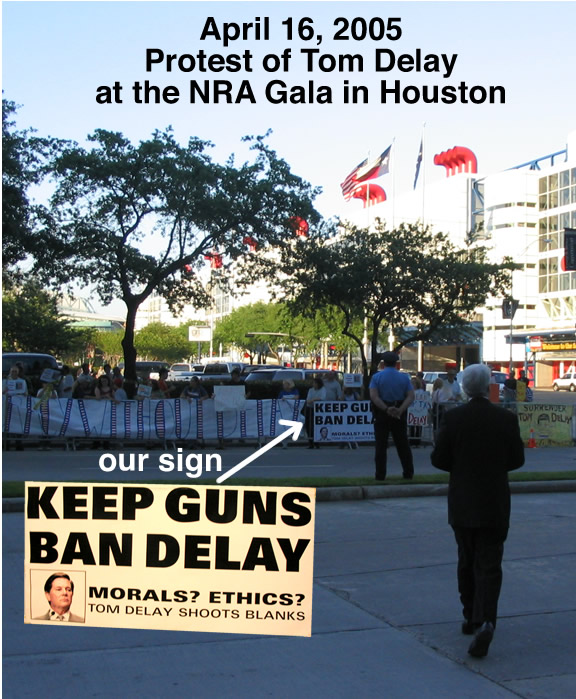 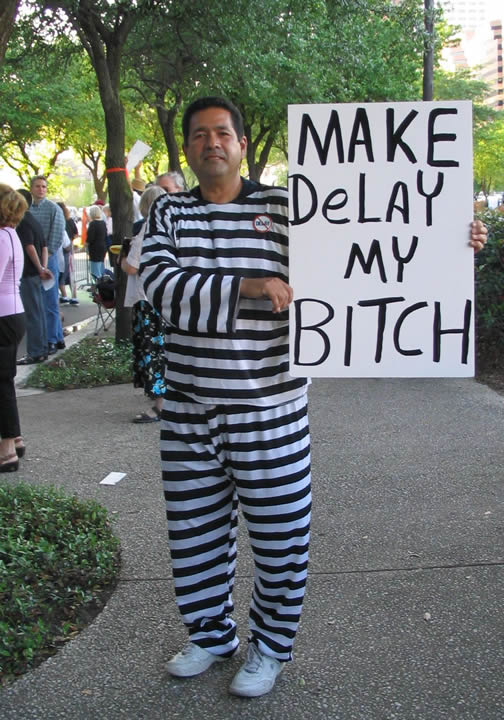 The ever in your face John Cobarruvias of the Bay Area New Democrats. If only the Dem leadership had that many huevos on their rancheros