On December 13, the US Attorney's office announced that it has dropped the civil rights case concerning Michael Ellerbe, a 12-year old boy who was shot in the back and killed by Pennsylvania State Police in Uniontown on Dec 24, 2002. 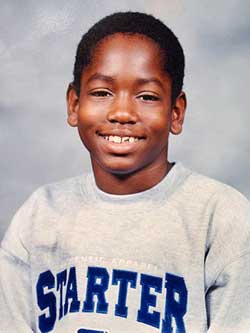 On December 13, the US Attorney's office announced that it has dropped the civil rights case concerning Michael Ellerbe, a 12-year old boy who was shot in the back and killed by Pennsylvania State Police in Uniontown on Dec 24, 2002.

Uniontown, 45 miles south of Pittsburgh, is a small working class town of about 12,000 that was devastated by the collapse of the steel and mining industries during the 1980s. Twenty-five percent of the population live below the poverty line. Uniontown residents tell of continuous harassment and mistreatment of people in their neighborhood by police. Just two days before Michael’s killing, an eight-year old boy in Uniontown had to be taken to the hospital due to injuries caused when police grabbed his neck and dragged him through a yard.

Mid-afternoon on Christmas Eve, 2002, two State Troopers paid a visit to Lemonwood Acres public housing complex, supposedly investigating a report that a stolen SUV was spotted in the area. Within an hour, the 12-year African-American boy lay dead, killed by a white police officer.

According to the two State Troopers in the case, Michael Ellerbe was shot while running away from them with his hand in his pocket, allegedly after he had crashed the SUV. One of the Troopers, Juan Curry, claims that his gun accidently discharged while he attempted to climb a fence in pursuit of Michael. The other Trooper, Samuel Nassan, maintains that he heard the shot, saw his collegue fall, and believing that Michael shot Curry, he then fired at the boy.

But Michael was unarmed and the officer was not shot. A 10-year old eyewitness says Curry did not fall and that Nissan deliberately fired his weapon three times. The bullethat killed Michael was never recovered.

"Michael had Pokemon cards in his pocket. He was a 12-year old child looking forward to Christmas. And they shot him like he was a deer," laments Renee Wilson, Director of People Against Police Violence.

After a brief inquest on January 27, 2003, the Fayette County Coroner recommended that no charges be filed against the Troopers and that the homicide was justifiable. The Fayette County D.A. then declined to file charges, and Ellerbe's family approached the U.S. Attorney's office to charge the two State Police officers with violating Michael's civil rights. After 23 months, U.S. Attorney Mary Beth Buchanan announced that there was not enough evidence to support criminal charges against the two Troopers and that they were closing the case.

"We are saddened and very disappointed at the decision of the U.S. Attorney," said Joel Sansone, Ellerbe's family's attorney. "We had hoped that the politics of the police department did not reach into the federal prosecutors office. But, being a political appointee, Ms. Buchanan has her own masters to serve. Clearly they don't include the rights of the little boy. It also seems that when it comes to misconduct the police are judged by a different standard than the rest of us."

Buchanan was quoted in the Post-Gazette as saying that she followed every lead that was passed on to her and the FBI. However, Wilson charges Buchanan with not telling the whole truth.

According to Wilson, there were witnesses who could challenge the State Trooper's accounts. These include the other children who were in the car on the 24th. She points out that unless those children are given immunity, the police are essentially threatening them with felony charges if they don't support the Troopers' testimony. Wilson says it is unclear whether the vehicle was stolen and that Michael was even driving it.

Wilson also wants to know why the FBI didn't investigate why the State Troopers were visiting the Lemonwood Acres in the first place instead of maintaining their posts at traffic control, which was their assignment, or why neither of them tested for alcohol or drugs. Renee notes that the Christmas Eve shooting occurred amidst reports that a Christmas party was taking place in the Trooper's Uniontown barracks. Drug and alcohol abuse is apparently a chronic problem for the state police -- so much so that Governer Rendell appointed an Independent Monitor for the Pennsylvania State Police in September 2003.

"This just goes to show that an African-American's life doesn't have the same value as a white person's. The same justice that Emmett Till's family got in 1955 the Ellerbe family is getting in 2004," Wilson remarks, "But we will never stop fighting for justice for Michael."

Michael Ellerbe's family are now pinning their hopes on civil suit that is currently in Federal court and expected to go to trial in late Summer or early Fall next year. "We have always believed that the only justice could and would come for Michael when Jeff Fieger and I can bring out all of the truth about what happened in the federal court case," said Sansone. (Fieger is a nationally-recognized civil rights attorney who has represented Dr. Jack Kevorkian in defense of several assisted suicides.)

People Against Police violence is organizing a protest on December 24th in Uniontown for the 2nd anniversary of the death of Michael Ellerbe. For more information, visit http://www.papv.org, email justice@papv.org or call Renee Wilson at 412-377-3570.

[This article will appear in the January issue of the NewPeople.]