Overview of what happened on Friday

So my day in court started pretty much at 8:30 AM. I arrived at the court house just before the trial began. It began in a very orderly fashion: there was no problem getting through metal detectors, there was no overwhelming/intimidating police display, there were no unreasonable delays before the trial started.
The first protester alphabetically was tried. The D.A. called the arresting officer (a detective who was listed on all of our paper work) who testified to the effect that there was a protest, that 10 orders to disperse were given, and that protesters were arrested en masse after those orders were not followed.
The defense essentially consisted of the following: the protesters were not given enough time to disperse, the police actually prevented protesters from dispersing, and no one individual could be proved by the police to have been disorderly.
The judge (who had reduced the misdemeanor obstructing public passage/misdemeanor failure to disperse charges to a summary offense obstructing public passage charge at the trial's beginning) found the protester guilty and sentenced him to 100 hours community service (minus 20 hours time served for the time he spent in jail) and $85 court costs. She then told the defense that this is how she was going to find every defendent and advised the prosecution and defense to come to some agreement so as not to spend any more time in court.
After a break our lawyers worked out a deal with the D.A. whereby all charges would be dropped in exchange for $85 court costs and 80 hours community service by each defendent. This deal was also retroactively offered to people who had worked out other deals already (including time on probation/a fee in exchange for dropped charges . . . I believe this option was called an "A.D.R.").
On advice from our lawyers who told us that this was a "sweet" deal (and I agree that it was very fair) most protesters took it. However, most of the people I talked to were somewhat uncomfortable with the bargain. Some felt that accepting it was a tacit acceptance of guilt, some felt uneasy reaching an agreement with the state against which they had been protesting.
Feeling that we were innocent of our charges and in order to reflect a sentiment we were feeling from our comrades four of us decided not to accept the agreement and to stand trial. In addition there was at least one protester to whom the bargain had not been extended and he stood trial after us.
I do not want to speak for my three comrades but I personally welcomed the trial as a chance to publically assert my innocence.
During our trial the prosecution brought forth three officers who claimed to have arrested three of us. No officer showed up who remembered arresting the fourth defendent. These officers testified that they gave us orders to disperse and that we ignored these orders.
In our defense we argued that we were trying to disperse, but that because the police had trapped us in the 700 block of William Penn Way we were physically unable to leave the area. We each also advanced one of two other arguments: that we heard no order to disperse, or that by the time we heard that order dispersing was impossible.
It was during the course of my cross-examination that the D.A. tried to admit an Indymedia post of mine. I had contributed to a discussion on tactics where I was making two points. One was that by not interrrupting the protests for over two hours the police had tacitly agreed to our rights to be there, changing the protests character from a civil disobedience to something else entirely. The other was that whether or not someone agreed with our tactics they should not contest our rights to protest.
I'm not actually sure what the D.A. was trying to prove with this post but the judge did throw it out.
Another telling moment during the trial was during the hearing of our fifth colleague. It was revealed that the police had been tracking him for the duration of the protest.
Eventually, one of us had our charges dismissed. The judge decided that because she had been at the protest to film it for a class project her case was different from the rest of ours. The other three of us were found guilty of the summary offense charge obstructing public passage. We were sentenced to either $150 fine + court costs or 100 hours community service + court costs. Our fifth comrade was found innocent of summary offense obstructing public passage but guilty of summary offense disorderly conduct. He was fined $300 + court costs.
My thoughts on the trial in general:
It has been pointed out that the judge was particularly friendly (maybe inappropriately so) with the D.A. and the police. Considering the fact that they are part of the same system I didn't think that this was unreasonable. One police officer was very unfriendly and there was a moment when I thought that he and one of our lawyers were going to get in a fight. All things considered, though, the police did behave courteously. The judge had her mind made up, I think, before hearing any testimony but all and all I thought that she was sympathetic, friendly, and fair. I did not feel that it was impossible that we would be found innocent; we COULD have convinced her, we just didn't. Our lawyers were WONDERFUL and to them I am eternally grateful.
There was a very objective, thorough article today in the Post-Gazette:

and even one in the Tribune-Review:

I look forward to reading Pulp and City Paper's accounts of the trial. We were in court from about 8:30 AM until about 3:30 PM.
Still feeling that I am innocent, I plan to appeal this decision. Meanwhile, though, I will be finishing my community service with Food Not Bombs and other organizations. I want to echo Mark's sentiments of thanks to everyone who stayed for our trial, to our lawyers, and to the Thomas Merton Center for their continued support. They and POG are the backbone of the activist movement in Pittsburgh and I for one cannot thank them enough for all that they have done for us.
Already from this experience has sprung up a dialogue about the validity of anonymous posting which you can read on this site. Also, I feel like the favorable press coverage has justified my decision to stand trial.
To quote from a flyer: "After this war our government keeps killing. After this war we keep fighting." The movement is unified, the movement is strong. This trial, I think, was a victory. The world is due for changing, what say we do what we can?
Peace and love to the Pittsburgh-122 and everybody. Thanks.

I remember the officer (was his last name Gaines? Baines?) was angered by attorney Lancaster's cross-examination and had papers rolled-up in his hand, and raised his hand towards the head of the attorney. The crowd made a slight "whoa" sound, and the judge made a slight face. I was really upset he was not formally admonished for that act of aggression. This is the same officer who claims to be a Vietnam veteran and was noted by others for his aggressiveness. There is a photo of him somewhere on this site. Someone else remarked that he seemed to be going for the "Shaft" look. He also appeared to have a non-standard issue weapon -- a knife with a wooden handle. Come to think of it, he had a lot of odd stuff on his belt that other officers did not have. Who would win in a fight, him or Tuffcop?

This is easy for me to say since I was not arrested, but I think everyone who was found guilty at a hearing should be aware of their right to appeal. I believe that the appeal must be submitted within 30 days and a deposit of $50 may be requird to guarentee your appearence. I believe, although I am not sure, that an appeal could eventually get you a jury trial on these charges. If I had been arrested, I think I would have not taken the deal, and would be appealing right now. An appeal could be useful in several ways:

It keeps the issue in the media.
You could get everything dropped, it is not likely that things would be worse than they are now.
You tie up the system, and make it more expensive for them to harrass you.
It is possible that with the cost of a jury trial factored in, the DA may choose not to go forward with it and charges may be dropped.

I believe that the lawyers involved in this case are doing an excellent job.

They will only appeal the case if there is good reason to appeal, and if the individuals want an appeal.

You should never look at using the court system to "tie things up" or to waste people's time. As citizens, we have the right to the court system for the simple purpose of obtaining justice.

I also think that overall the judge was fair, but i think her guilty verdicts were based more on the earlier events where hundreds of demonstrators blocked traffic, than on the actual events at the time of the arrest. I got the idea that she felt that the entire demonstration was problematic and wasn't sympathetic to our tactics of having an unpermitted march. I also think the deal worked out where we have to perform 80 hours of community service in 90 days (holy crap that's a lot of hours) is designed to keep us too busy to be organizing any other actions until this war is completely over. Still, community service is something that i do anyway, i'll just have to do a whole shit-load more of it in the next 3 months. If anybody decides to appeal, you have my full support. I also have to agree that the way this community has stuck together is really inspiring, from the vigil while we were in jail to people who had taken the deal sticking around with those who stayed and fought. Good job, everyone! 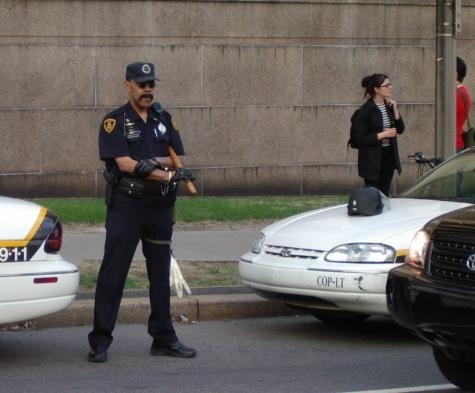 this wouldn't happen to be the tough cop you were referring to, would it? i remember him from march 20th, he actually pushed me back up to the sidewalk and swore at me when i tried to disperse before we were arrested

i saw him in the court room near the end of the day. couldn't get close enough to read his badge number/name tag, but i believe his last name starts with an M.

could be wrong though

That is the guy who I thought was going to get in a fight with Attorney Lancaster.